In her address to the participants, the Mayor of Gabrovo, Tanya Hristova stressed:

“As a member of the Committee of regions and Mayor of a European city, I consider it of utmost importance to obtain guarantees that the Europe’s vision will be based on of investments’ increase for encouraging cohesion, sustainable growth and job creation in the cities and regions. Only then, we will succeed in restoring the citizens’ sense of belonging to the common European project.”

She mentioned that it is extremely important that Europe continues to provide the financial framework for quality investments through its cohesion policy but also to act in synergy with other financial resources at local, regional, national and European level.

During the debate, the President of the Republic of Bulgaria indicated Gabrovo as a place, exceptionally suited for a debate for the future of the country and emphasized that nowadays the future is decided not on the battlefield but in the classrooms. Plevneliev stated that Gabrovo certainly can create an innovative ecosystem that to be a symbol of the cooperation between universities, schools, entrepreneurs, successful businessmen and institutions and develop the industries of the future. “The solution for Bulgaria is in the strong institutions and good education. However, in order that the institutions are effective, ensure compliance with the rules by everyone and the democratic legal order they need an active civic society. Thank you for being part of it.” said, in his concluding words in Gabrovo, Rosen Plevneliev.

The initiative in Gabrovo was part of the series of dialogues, in which all the members of the European commission take part and which are conducted in all the countries of the European Union.

Tanya Hristova, Mayor of Gabrovo, Head of Bulgaria delegation at European Committee of the Regions

Rossen Plevneliev, President of the Republic of Bulgaria

Markku Markkula, President of the European Committee of the Regions

Ognian Zlatev, Head of the Representation of the European Commission in Bulgaria

President of the Republic of Bulgaria

President of the European Committee of the Regions

Head of the Representation of the European Commission in Bulgaria 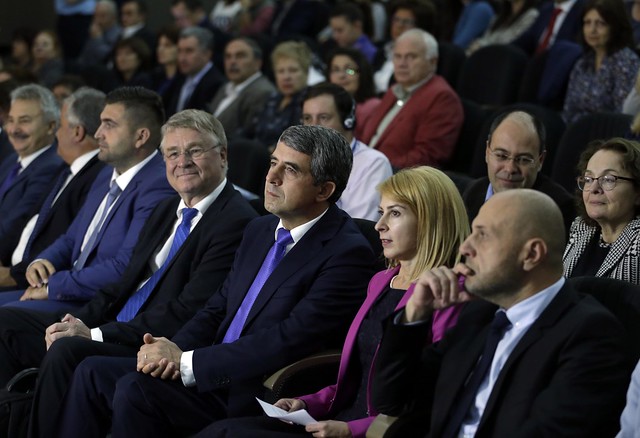